This week’s FFwD recipe, the Orange-Almond Tart, received only a fair review. Tasters found it too sweet, the crust especially. This tart uses Dorie’s Sweet Tart Dough which has half a cup of confectioners’ sugar in it compared to a teaspoon of sugar in the regular tart dough. Apart from it being sweet, I like this tart dough for its buttery, shortbread-ish texture. It comes together easily in a food processor and it can be pressed into the tart pan or rolled out. I chose to press it in so I don’t have to deal with the rolling!

The almond cream filling wasn’t too bad and the two teaspoons of dark rum in it gave it a slight ‘adult’ taste. One interesting step in this recipe is the cut orange segments have to be dried out in between layers of paper towels before being used. (I found that a waste of lovely Sunkist navel oranges!) Contrary to what Dorie said, this did not enhance the flavour of the oranges, which were sweet and juicy when they were fresh, but rather, they lost some flavour after being baked. I also thought some pieces tasted a little bitter. Hmm…? 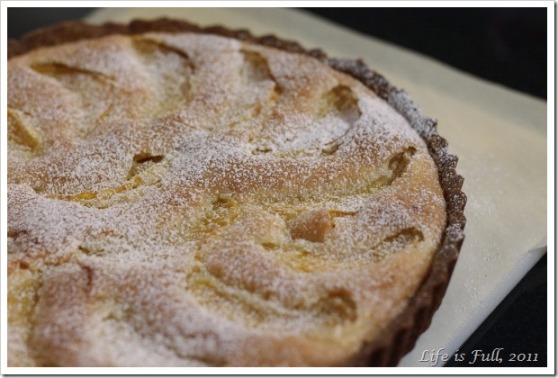 The crust, which was first blind baked, turned too brown after the final baking. Overall, I found this a nice fancy dessert which I would serve at dinner parties. I would reduce the amount of sugar though and cover up the edges of the crust with foil halfway through baking.

One nice thing that happened in the course of making this dessert is I ‘reconnected’ with my old food processor. My 6-cups Kenwood FP110, which I brought over from Malaysia, had been stored away in my basement even since I moved into this house. I had forgotten about it and even contemplated buying a new food processor but the ones here are clunky and expensive. My Kenwood has steel blades, is compact and not too heavy – almost perfect except for the fact that it doesn’t work on the voltage here. Nothing a converter can’t fix though.

Click here to look at the tarts other French Fridays with Dorie members made.

Posted by Life is Full on February 10, 2011 in Baking, Food, French Fridays with Dorie 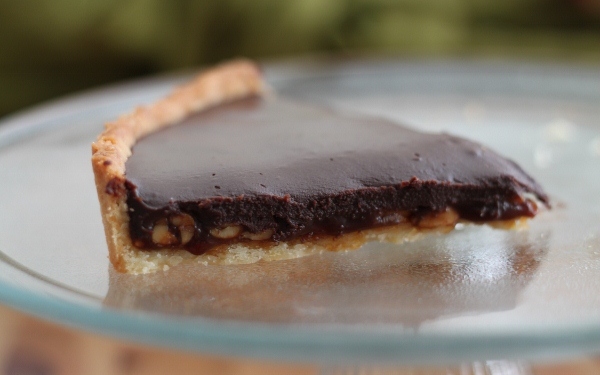 My friend, Mariko, whom I haven’t seen in more than a year, came over to visit yesterday with her family. It was great catching up with her and seeing her family again. I know Mariko has a weakness for food that’s sweet and salty so this chocolate-crunched caramel tart was the perfect thing to bake for her. It’s a chocolate tart with a bottom layer of peanuts enrobed in caramel.

You can get the recipe for the tart crust here. I made the tart crust by hand and rolled it out in my pie crust maker as I find it difficult to press the dough into the pan.

You can get the recipe for the tart here. Dorie said the tart should be served the day it is made so I did everything the night before except pour the ganache over the tart. I kept the tart at room temperature overnight. The next day, I warmed the ganache and finished assembling the tart. The recipe says to refrigerate the assembled tart for no longer than 30 minutes and then keep it at room temperature until serving time so that the caramel layer is soft and stretchy and the chocolate smooth. However, my ganache did not set in 30 minutes. I put it back in the refrigerator longer but it still did not set up firmly when I cut into it later. The chocolate layer drooped all over and covered the sides of the slice of tart. I stored the leftover tart in the refrigerator overnight and took it out the next morning and let it come to room temperature before cutting a slice. The ganache has set but it still pulls away with the knife.  You can see in the photo the chocolate layer drooping at the tip of the slice.

The tart tastes good though; crunchy peanuts, soft caramel and melt-on-your-tongue smooth chocolate, all on a buttery crust. If I were to make this tart again, I would finish assembling the tart the night before, store it in the refrigerator and serve it the next day at room temperature. I will also use regular salted roasted peanuts in place of honey-roasted peanuts so there will be more ‘salty’ in the tart. Mariko thinks the tart is very nice and even took some home. That should be enough to tell me the tart was a success. 🙂